India E-Rickshaw market crossed USD 2.5 billion mark in 2018 and is expected to grow at a CAGR of XX.0% during the forecast period 2019-2025. E-Rickshaw is a flexible, non-polluting and affordable means of Intermediate Para-Transit (IPT) system. E-Rickshaw is the latest entry in the Indian road transportation system. Since E-Rickshaw has been introduced in India, it has been playing a significant role in solving the issue of last mile intercity connectivity. Since 2010, E-Rickshaw has been operational in India, mostly in Delhi-NCR region. Since then, this vehicle has gained immense popularity due to environment friendly nature along with its potential to curb the carbon footprint as it is battery operated. Today, E-Rickshaw has become one of the most preferred modes of transportation in major urban and suburban cities of India. SmartE launched in October 2015, has served over 6 million ‘zero-pollution’ rides. By December 2017, SmartE aims to serve over 3 million commuters per month, through its 1,000 E-Rickshaw fleet. SmartE also aims to roll-out 10,000 vehicles by 2018-end and cross the 100,000 vehicle mark by 2020. At 100,000 vehicles, SmartE will help reduce close to a million tonnes carbon emissions, an equivalent of planting 17 million trees per year.

Across the country, electric rickshaw has become an important part of the transport system and is expected to witness a significant growth over the forecast period on account of government plans such as the National Electric Mobility Plan (NEMP). The government aims to encourage the use of electric vehicles in India along with the commitment to build an efficient electric vehicle network including adequate charging stations and incentives on buying an electric vehicle. 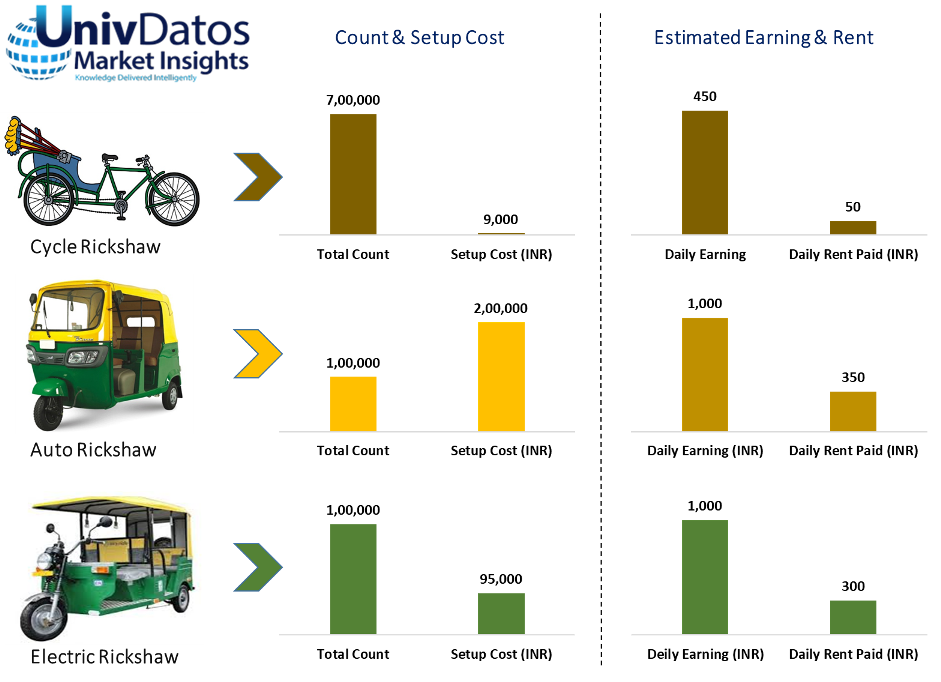 According to the Society of Manufacturers of Electric Vehicles (SMEV), electric vehicles’ sale doubled in terms of volume in the FY 2017-18 compared to the previous year, majorly through unregulated E-Rickshaw market, with 850,000 E-Rickshaw sold in the specified period. The drivers of the traditional manually-pulled rickshaws have found E-Rickshaws quicker, quieter and easier to keep running as they require less effort, compared to the pedal-cycle rickshaws. This results in more rides and lesser effort for the driver, making E-Rickshaws a rather beneficial investment for them.

The Indian government is currently focusing on promoting electric vehicles in the public transportation and fleets, with emphasis on two-wheelers and three-wheelers, taxis and buses. One of the biggest hurdles in the growth of electric vehicles in India is the dearth of charging and battery-swap stations. The Ministry of Finance is in the process of finalising a plan to spend approximately US$600 million over a period of five years to upgrade the country’s charging infrastructure as well as to provide better subsidies on electric buses. According to BNEF, India had just 425 public charging stations in 2017 and it is expected that with government and public initiatives this number will boost to 2,800 by 2022.

In terms of segmentation by vehicle type, India E-Rickshaw market has been segmented into Passenger and Load carrier. In 2018, passenger carrier dominated the market and is expected to maintain its lead by the year 2025. With growing working population, the need for efficient transportation network has also increased. Hence, as E-Rickshaw is easily available and offers convenient ride, the number of commuters preferring E-Rickshaw for short distance is increasing. All these factors would help better and increased adoption of E-Rickshaw in major Indian cities.

“Amongst battery type, lead acid holds the major share in 2018 while li-ion is expected to grow considerably during the forecast period.”

“Delhi-NCR, Lucknow and Kolkata regions together hold 40% of the market share of India E-Rickshaw Market in 2018 and will continue to do so over the forecast period”

Based on region, detailed analysis has been conducted to understand the overall rate of adoption of E-Rickshaw in major Indian cities including Delhi-NCR, Lucknow, Kolkata, Nagpur, Bengaluru, Pune, Chennai, Hyderabad and other cities. Delhi-NCR captured the maximum market share and is expected to keep leading the India E-Rickshaw market over the projection period. However, with increasing acceptance, it is believed that several cities including Kolkata, Bengaluru, Chennai, and Hyderabad will witness considerable growth in the India E-Rickshaw Market.

Strategies of Cab & Other Aggregators for E-Rickshaw Sector in India 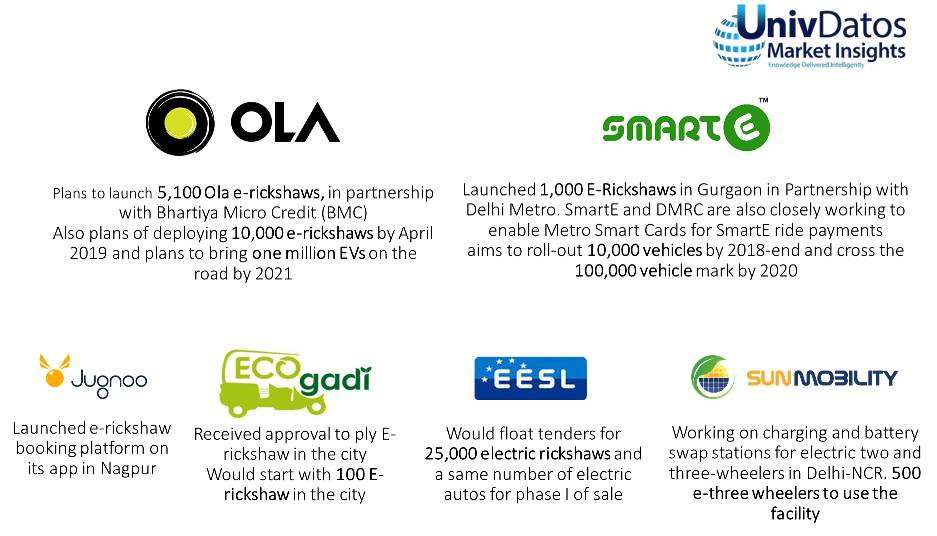 India E-Rickshaw market can be customized to the state level or any other market segment. Besides this, UMI understands that you may have your own business need, hence we also provide fully customized solutions to clients.

Analysing historical market, estimation of the current market and forecasting the future market of India E-Rickshaw were the three major steps to create and analyse the overall market of India E-Rickshaw in different Indian cities. An exhaustive secondary research was done to collect the historical market sizing of the E-Rickshaw and overall estimation of the current market. Secondly, to validate these insights, numerous findings and assumptions were taken into consideration. Moreover, exhaustive primary interviews were conducted with industry experts across value chain of the Indian E-Rickshaw market. After all the assumption, market sizing and validation of market numbers through primary interviews, top-down approach was employed to forecast the complete market size of Indian E-Rickshaw market across different cities. Thereafter, market breakdown and data triangulation methods were adopted to estimate and analyse the market size of segments and sub-segments of the sector. Detailed methodology is explained below:

After acquiring the historical market size of different segments and sub-segments, detailed factor analysis was conducted to estimate the current market size of the India E-Rickshaw market. Factor analysis was conducted using dependent and independent variables such the penetration of E-Rickshaw, its availability, passenger preference, and driver/owner benefits. The historical trends of the India E-Rickshaw market and its year-on-year impact on the market size and share in the recent past was analyzed. The demand and supply side scenario was also thoroughly studied.

Current Market Sizing: Based on the actionable insights from the above 3 steps, we arrived at current market size, key players in major applications and markets, industry’s supply chain, and value chain of the industry. Initiatives undertaken by these players to increase the overall adoption of E-Rickshaw as a mean of public transport. All the required percentage shares, splits, and market breakdowns were determined using the above mentioned secondary approach and were verified through primary interviews.

Estimation & Forecasting: For market estimation and forecast, weightage was assigned to different factors including market dynamics such as drivers & trends, restraints, and opportunities. After analyzing those factors, relevant forecasting techniques i.e. Bottom-up/Top-down was applied to arrive at the market forecast pertaining to 2025 for different segment and sub-segments for different Indian cities. The research methodology adopted to estimate the market size encompasses:

Primary Research: In-depth interviews were conducted with the Key Opinion Leaders (KOLs) including Top Level Executives (CXO/VPs, Sales Head, Marketing Head, Operational Head, and Regional Head etc.). In addition, for primary interviews special focus was given to the E-Rickshaw drivers in the cities such as Delhi-NCR, Pune, Chennai, Bengaluru among other cities. The primary research findings were summarized, and statistical analysis was performed to prove the stated hypothesis. The inputs from primary research were consolidated with secondary findings, hence turning information into actionable insights.

The Data Triangulation technique was employed to complete the overall market engineering process and to arrive precise statistical numbers of each segment and sub-segment pertaining to the India E-Rickshaw Market. The Data was split into several segments & sub-segments post studying various parameters and trends in the areas of passenger vehicle and load carrier. Further, based on the battery type, lead acid battery and li-ion battery were also taken into consideration in the evaluation of India E-Rickshaw Market. Owned E-Rickshaw dominated the market over rented E-Rickshaw in major Indian cities.

The current & future market trends of the India E-Rickshaw market are pinpointed in the study. The investors can gain strategic insights to base their discretion for investments from the qualitative and quantitative analysis performed in the study. The current and future market trends would determine the overall attractiveness of the market, providing a platform for the industrial participant to exploit the untapped market to benefit as the first mover advantage. Other quantitative goal of the studies includes: