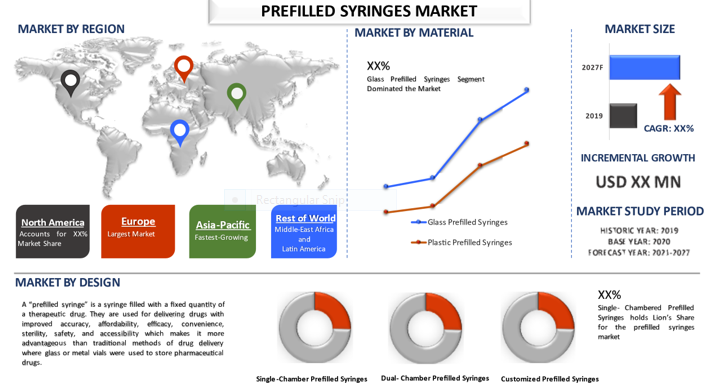 Global Prefilled Syringes Market was valued at US$ 1,432.2 million in 2020 and is anticipated to reach US$ 3,301.1 million by 2027 displaying an elevated CAGR of 10% over the forecast period (2021-2027). A “prefilled syringe” is a syringe filled with a fixed quantity of a therapeutic drug. They are used for delivering drugs with improved accuracy, affordability, efficacy, convenience, sterility, safety, and accessibility which makes it more advantageous than traditional methods of drug delivery where glass or metal vials were used to store pharmaceutical drugs.

Some of the key factors anticipated to drive prefilled syringes market are rising demand for prefilled syringes are growing prevalence of chronic diseases such as heart diseases, diabetes, and autoimmune diseases, which require patients to self-administer medications, technological advancements, rising adoption of self-injecting parenteral devices, and supportive government regulations (especially needlestick legislations). Globally, in 2019, approximately 436 million adults (prevalence 9.3%) were suffering from diabetes, and it is expected to rise to 700 million (prevalence 10.9%) by 2045. Moreover, more than 1.1 million children and adolescents are living with type 1 diabetes (Source: International Diabetes Federation). 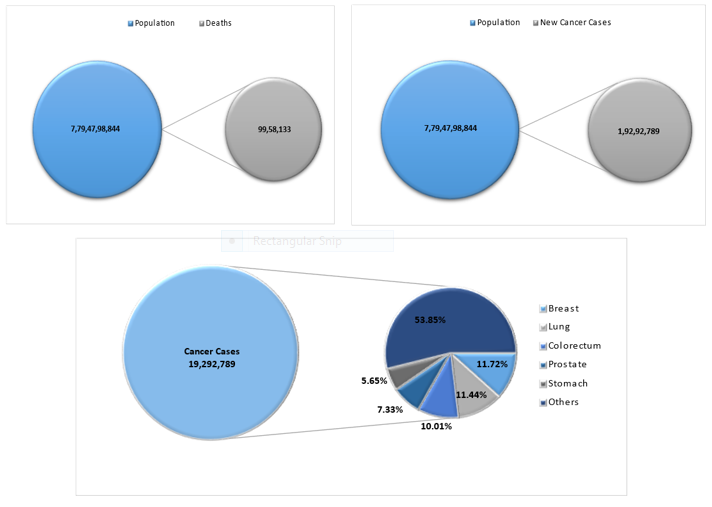 The increase in incidences of cancer globally owing to the increase in geriatric population has been one of the prime factors that augment market growth. In 2020, according to WHO, cancer was considered as the leading cause of death in the world. Nearly 10 million people die due to cancer each year, making it the second leading cause of death across the world. Nuclear medicine scans can help in finding tumors and to analyze how much the cancer has spread in the body (called the cancer’s stage). They can also be used to determine whether treatment is effective.

“Amongst application, the diabetes segment holds the major share”

Based on application, the market is categorized into diabetes, rheumatoid arthritis, anaphylaxis, cancer, thrombosis, and others. At present, diabetes segment dominates the market and is expected to maintain its dominance during the analyzed period as well. This supremacy is ascribed to the fact that diabetes requires constant medications for treatment. Besides, rising prevalence of diabetes along with favorable demographic trends also increases demand for prefilled syringes with insulin that will prove beneficial for segment revenue.

“Europe signifies one of the largest markets of Prefilled Syringes market”

For a better understanding of the market dynamics of the Prefilled Syringes market, a detailed analysis was conducted for different regions across the globe including North America (United States, Canada, and the Rest of North America), Europe (Germany, France, Italy, Spain, United Kingdom and Rest of Europe), Asia-Pacific (China, Japan, India, South Korea, and Rest of APAC), Rest of World has been conducted. Europe is slated to dominate the prefilled syringes market share during the forecast period on account of growing uptake of self-injectable drug devices and increasing preference for biological drugs for treating chronic diseases. In addition to this, growth of the biologics and biosimilars market, high adoption of patient safety measures, technological advancements and geographical expansion by key manufacturers are further driving the demand for self-injectable prefilled syringes in the region.

The Prefilled Syringes market can further be customized as per the requirement or any other market segment. Besides this, UMI understands that you may have your own business needs, hence feel free to connect with us to get a report that completely suits your requirements.

Get in touch with team
1 MARKET INTRODUCTION

Analyzing the historical market, estimation of the current market, and forecasting the future market of the global prefilled syringes market were the three major steps undertaken to create and analyze the adoption of prefilled syringes amongst population across major regions globally. Exhaustive secondary research was conducted to collect the historical market numbers and estimate the current market size. Secondly, to validate these insights, numerous findings and assumptions were taken into consideration. Moreover, exhaustive primary interviews were also conducted, with industry experts across the value chain of prefilled syringes. Post assumption and validation of market numbers through primary interviews, we employed a top-down approach to forecast the complete market size. Thereafter, market breakdown and data triangulation methods were adopted to estimate and analyze the market size of segments and sub-segments the industry pertains to. Detailed methodology is explained below:

After obtaining the historical market size of the Prefilled Syringes market, we conducted a detailed secondary analysis to gather historical market insights and share for different segments for major regions. Major segments included in the report are type, material, design, and application. Further country-level analyses were conducted to evaluate the overall utilization of prefilled syringes in every region.

After acquiring the historical market size of different segments and sub-segments, we conducted a detailed factor analysis to estimate the current market size of prefilled syringes market. Further, we conducted factor analysis using dependent and independent variables such as rising target disease population. A thorough analysis was conducted for demand and supply-side scenario considering top partnerships, merger and acquisition, business expansion, and product launches in the prefilled syringes industry across the globe.

Current Market Sizing: Based on actionable insights from the above 3 steps, we arrived at the current market size, key players in the prefilled syringes market, and market shares of the segments. All the required percentage shares split, and market breakdowns were determined using the above-mentioned secondary approach and were verified through primary interviews.

Estimation & Forecasting: For market estimation and forecast, weights were assigned to different factors including drivers & trends, restraints, and opportunities available for the stakeholders. After analyzing these factors, relevant forecasting techniques i.e. top-down/bottom-up approach was applied to arrive at the market forecast about 2027 for different segments and subsegments across the major markets globally. The research methodology adopted to estimate the market size encompasses:

Data triangulation technique was employed to complete the overall market estimation and to arrive at precise statistical numbers of each segment and sub-segment of the prefilled syringes market. Data was split into several segments & sub-segments post studying various parameters and trends in the areas of type, material, design, and application of the Prefilled Syringes market.

The current & future market trends of prefilled syringes were pinpointed in the study. Investors can gain strategic insights to base their discretion for investments from the qualitative and quantitative analysis performed in the study. Current and future market trends were determined the overall attractiveness of the market at a regional level, providing a platform for the industrial participant to exploit the untapped market to benefit as a first-mover advantage. Other quantitative goals of the studies include: